Is this blog good enough to make the Lexiophiles list of best blogs on language technology?

I received this in an email from Priscilla Andrade at Lexiophiles.

Dear Vance Stevens,
We have received 495 nominations for The Top 100 Language Blogs 2010 competition. For each of the four categories we have admitted 100 blogs into the voting phase. Your blog ‘adVancEducation’ (http://advanceducation.blogspot.com/) is included for voting in the 'Language Technology' category. Congratulations!
As stated in our language blog Lexiophiles, 50% of the final score will be based on user votes. You can promote your blog by embedding the above voting button in your page. Simply add the code to a blog post  so that your readers can vote for you directly:
The voting phase starts today, May 12th, and ends on May 24th 2010. Winners will be announced May 28th.
Good luck!
Priscila
on behalf of the bab.la and Lexiophiles team

It seems they are in the position of recommending blogs related to language and language learning, and to corroborate their own choices they decided to ask their followers to vote on their favorite blogs.

To my knowledge this is the first time my blog has been nominated for anything, so I'm flattered if not deeply honored. I don't think I will go to any great effort to request that people in my network vote for my blog.  If I were to make the Lexiophile list of 100 best blogs related to language and language learning I would be head over heels, but I would prefer to win strictly on merits; whereas if I asked my network to vote for me and even that did not yield the desired results, I would have lost two popularity contests :-)

But if you happen by here and think it's a blog worth voting for, that would be great, and you should be able to do that by clicking on the button (and then scrolling through the list to find AdVancEducation near the top, ticking in the radio button, then scrolling down and clicking "Vote" :-)

Posted by Vance Stevens at 4:40 PM No comments: 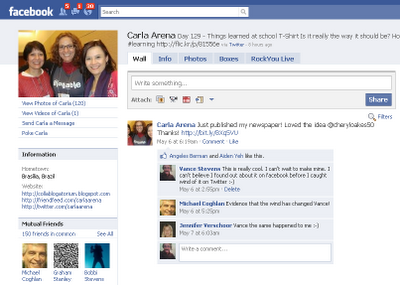 I'm overdue for a blog post here (funny how real life intrudes at times on the virtual one :-).  Someone asked on the Webheads list this morning, how long will Facebook last?  This person was trying to decide if she should delete her professional contacts from her Facebook account since she was finding she used it more to stay in touch with friends and family, and her professional contacts in that mix seemed increasingly a mismatch.  So I answered something like this:
How long will Facebook last?  According to the stats cited in its Wikipedia article (the same page also comes up high in a Google search on 'Facebook statistics') growth in use of Facebook was 145% last year in the USA, and in over-55's an astounding 923%.  I don't think it will go away next year or the year after.
http://www.istrategylabs.com/2010/01/facebook-demographics-and-statistics-report-2010-145-growth-in-1-year/
I went to a TESOL presentation once where a teacher in the UAE was using Facebook with his students and he had a separate account for that apart from his main one.  So I guess it would be possible to maintain two personas, but without that personal touch we wouldn't know about Ruth Vilmi's colorful paintings, that Wesley Fryer almost encountered a tornado at his last presentation, that Serpil Sönmez just got married, or the context from which Carla Arena and Aiden Yeh derive their amazing inspirations with students. ( I got this list from scanning my own Home page in Facebook just now.  These are just a few updates from my professional contacts listed there, so I think you get the idea.)
I think one reason for Facebook's success is that it helps us bridge that gap between our work and social and family lives that used to be studiously, and artificially, kept separate.  We take bridges for granted now, it's human nature to build them, they're generally positive developments. Webheads does this too.  Personal + professional = natural, and thanks to technology we CAN build these bridges now, whereas before digital natives, this was impossible on such a grand scale.
As an inveterate cat herder I instinctively steer away from trying to drive social media.  It's media, it drives us (The Machine is Using US, right?). So I would advise to accept the way our world has headed, blended learning, blended professional development, blended families and friends. There's no need to build artificial walls unless you really find a problem. A lot of times we assume there will be or could be, but when once we accept that healthy mix of personality and professionalism, it turns out the two often go compatibly hand in hand.
Of course, don't keep skeletons in your digital closet, but I think there is growing awareness of how to manage that downside. I encountered recently the ameliorating concept of "mutually assured disgrace" where people are learning not to rattle the skeletons in the closets of others since we are all equally vulnerable to inappropriately abusive probes of our digital online artifacts - but for most of us, our digital footprint speaks highly of us, well beyond reproach, and the real issue here is making students aware of the ramifications of similarly maintaining their own web presence.
Accordingly, I haven't had any problem yet, and I find my use of Facebook changing as I use the media.  As one example of this change, check out http://screencast.com/t/NGRlZjMwMDg, where I expressed surprise at finding out about http://www.paper.li in Facebook from Carla Arena's post rather than first on Twitter as I would have up to now expected, and this attracted comments from Michael Coghlan and Jennifer Vershoor, who both concurred with this observation.
The times they are a changing, at an accelerating pace, rapidly approaching Singularity, http://www.kurzweilai.net/articles/art0134.html?printable=1.   Until we reach that point of infinitely altered intelligence (which in Kurtzweil's words, "can manipulate matter and energy to do whatever it wants"), best to go with the flow.
Posted by Vance Stevens at 4:22 AM No comments: