I created my first UTipU video today. Thanks Nellie for the good tip, worked very well!

I wanted to see the button that can be generated. That's it above, not that impressive. I wish it could say what it was. In any event, the video, about creating animations in PowerPoint (now I'll bet you REALLY wanna watch it !! ;-) is here: http://www.utipu.com/app/tip/id/4712/. That link offers you a download (free, and well worth the bandwidth).
Posted by Vance Stevens at 12:25 PM 2 comments: 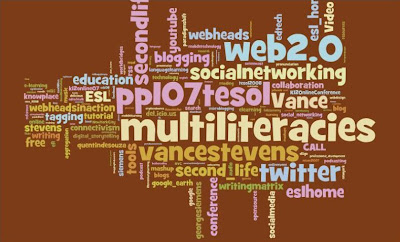 I've been meaning to do this for some time. It's a Worldle tag cloud from my Delicious feed:

Stop presses! This just in ... 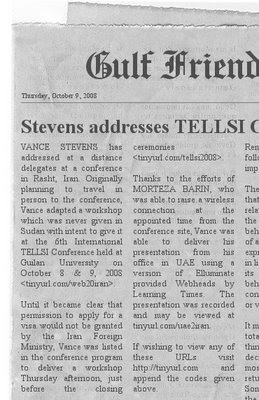 VANCE STEVENS has addressed at a distance delegates at a conference in Rasht, Iran. Originally planning to travel in person to the conference, Vance adapted a workshop which was never given in Sudan with intent to give it at the 6th International TELLSI Conference held at Guilan University on October 8 & 9, 2008 <tinyurl.com/web20iran>.

Until it became clear that permission to apply for a visa would not be granted by the Iran Foreign Ministry, Vance was listed in the conference program to deliver a workshop Thursday afternoon, just before the closing ceremonies <tinyurl.com/tellsi2008>.

Thanks to the efforts of MORTEZA BARIN, who was able to raise a wireless connection at the appointed time from the conference site, Vance was able to deliver his presentation from his office in UAE using a version of Elluminate provided Webheads by Learning Times. The presentation was recorded and may be viewed at tinyurl.com/uae2iran.

Links to URLs are
Clipping courtesy of http://www.fodey.com/generators/newspaper/snippet.asp

Morteza has been trying to post this comment from Iran but he gets a blank page when he clicks on Comments and tries to post. He can read the comments already there but can't post from where he is in Iran. He sent me this and asked me to put it here:

A Dream which changed into a Reality
I was very disappointed and very worry about the tools and amount of cooperation for having a live conference at the main time according to the conference time. After two days going here and there and speaking with conference organizers finally i found a wireless internet connection the Conference main Hall. And changed our place with another person who wanted to have a presentation in that place. I was full of stress and my blood pressure went up I thought I was burning in the fire but everything changed and first connection with Vance showed me there a way to do it. At that time I asked someone to go invite Dr.Susan Marandi to come to the main Hall. But She was invited to meeting for discussing about TELLSI.I asked God to help me and
succeed.
Posted by Vance Stevens at 4:44 AM 2 comments: