Abstract:
This post relates how #evomc16 co-moderators are using Minecraft to help teachers understand how gamification might work for them in their classrooms by giving all concerned the experience of interacting in the game.

Gamification is modeled in the Big G Game space through creation of a Google+ community "gameboard" and having participants figure out from there what they have to do to play the game. Eventually they end up in Minecraft in creative mode. They then graduate to coping with survival in the more challenging game environment, and through that experience learn that gamification is all about teamwork, mutual support, meeting challenges, and achieving goals, whatever they are, and however they themselves define them.

The ‘aha’ moment occurs when the players succeed in both the upper and lowercase games and realize that, if what they were trying to teach were placed in such a context, it would not only become more engaging to the learners, but their students would be taking their own learning into their own hands. This can create a powerful learning environment, but educators need to experience it for themselves in order to understand it.

There are 185 people enrolled in the Google+ community that serves as the base for EVOMC16, https://plus.google.com/u/0/communities/112993649763396826671, but far fewer actively engaged participants. For this small coterie, it seems to be going well. They have found in the Google+ community page the link to the syllabus, http://tinyurl.com/evomc16-syllabus, which points to a set of missions here: http://missions4evomc.pbworks.com/. The missions are pretty straightforward -- or, they must be, as participants seem to be finding them and doing them without asking too many questions, and when they do ask and the moderators respond, the response seems to get them on task.

Gee (2008, p.24) distinguishes the little ‘g’ game, the software comprising a game such as Minecraft, and the Big ‘G’ game or "social setting" that the little ‘g’ game helps to gamify. Going to the Google+ community page and figuring out where the session components are and what you are supposed to do with them is how you play the Big G Game of EVO Minecraft MOOC. Completing the 10 missions (or a to-be determined number) leads to the awarding of an EVOMC16 survivors badge. Evidence of completion of the required missions is recorded in a Google spreadsheet which is in turn linked from a click on the badge. The badge is awarded through Credly. The Credly system validates awards through specification of criteria needed to earn a badge. A link from the badge awarded directs anyone who clicks on your award to an open document displaying verifiable evidence of what was accomplishment. 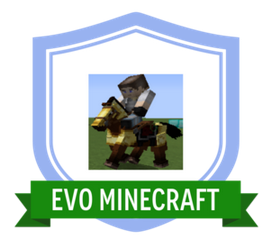 The missions are, for weeks 1 and 2:
These missions have provided our demographics for this session and shown us who we are likely to be working with through to the end of the session. As things stand midway through the session:
What our participants lack in number they have been making up for in energy. Our server in creative mode has been attracting some impressive builds. Here are a few who have posted their achievements on our Google+ Community page.

In order to access the roller coaster, you have to answer three questions about Minecraft. When the switches with the answers are correctly set, a door opens, and you can push a button to set the train in motion. Enjoy this ride!

It looks like the participants mentioned above are well on their way to earning their badges, and there are only a few missions left to accomplish. These are set in weeks 3 and 4 of the session, with week 5 being set aside for consolidation, learning from one another, helping others who might be inspired to catch up, and of course helping each other stay alive in survival mode. The transition to survival mode is planned for week 4, and will continue for as long as the server stays alive and properly maintained in Aaron’s office at Ohio University.
The focus of Week 3 has been Networking, finding out what’s available in the wider world of Minecraft.

For week 3 the missions are to
and for week 4 to
Each set of missions is described in a page at our missions wiki; for example this one for week 3, on networking: http://missions4evomc.pbworks.com/w/page/103905655/2016_Week3_Network

Apart from the several networks of educators using Minecraft mentioned there, networking activities in our group included:
The networking aspect is what we focus on in this and other sessions like it. Most participants are starting to figure out that effectively networking is the key to success in the Big G game. This is modeled in the design of the EVO session, and in how the session is conducted. Not only are participants learning a lot about about Minecraft but they are starting to find their way about the EVO session itself. They're figuring out that the session is itself set up itself like a game.

Why is it like a game? There are two answers to the question.
This is normal for the app culture. When you go to Facebook and Google+, you don't get clear instructions. You're thrown into an interface and you see what's there and work out what you're supposed to do and how it will benefit you. So for participants who want to play the Big G game of EVOMC16, they go to our Google+ page where they find a sidebar with links they can click on. One of the links is to a syllabus, an outline of what they'll be doing each week during the session. The weeks are themed on Cormier's (2010) well-known five phases of coping in MOOCs, i.e. orient, declare, network, cluster, and focus (see Stevens, 2015, for elaborated explanation).

The syllabus alludes to missions that must be accomplished each week, and links point participants to the wiki where there is more information about each of the missions. The missions have participants do basic things like purchase Minecraft, get a username, introduce themselves to the community, join us in-world in creative mode in order to practice for our shift to survival, and fill in the Google sheet where participants will track their missions accomplished in pursuit of the one badge on offer at the moment.

As of now we have just completed Week 3 on networks of educators using Minecraft. One aspect of networking is reaching out to the community within. We are hoping to arrange other tours with members of our community, such as the one by Thorsten Gross mentioned above, as our participants are turning out to be a rich source of modeling for all of us

We are all learning about gamification here, it's not so much about Minecraft. Minecraft is the little g game, the enabler of our emerging knowledge of gamification. When you enter survival mode you'll find that you are assisted by others in world. With their help you stay alive and learn. So gamification turns out to be learning through teamwork and mutual support and meeting challenges and achieving your goal, whatever it is. In this game you set your own goals. By achieving your goals in the game light bulbs go off in your head and light your way to some realization of how what you are learning in EVOMC16 might work to meet your real world challenges.

The 'aha' moment occurs when the players succeed and realize that if what they were trying to teach were placed in such a context, it would not only become more engaging to the learners, but their students would be taking their own learning into their own hands. This can create a powerful learning environment, and educators need to experience it for themselves in order to understand its implications.

The above citation is for this post. This post was updated on Jan 31, 2016 and submitted to the Connecting Online 2016 (CO16) WizIQ blog. That post was rejected by the staff keeping the blog at WizIQ because it did not promote the session itself. However, I gave my presentation on this topic at CO16 on Feb 7, 2016 and blogged the archive of the recording here:
http://learning2gether.net/2016/02/07/vance-stevens-at-co16-evo-minecraft-mooc-and-gamification-of-teacher-professional-development/

I published the video of the recording on YouTube

Posted by Vance Stevens at 6:23 PM No comments: