Future of Learning in a Networked World, Argentina and Brazil 2010

This is a quick post from a pleasant outdoor bar/restaurant with free wireless in view of the beach where I was just swimming in Toque Toque Piqueno, Brazil.  I composed offline and I'm taking advantage of available time and bandwidth to get this into the cloud.  I'll be back with URLs and photos to illustrate. (Here's one from Michael Coghlan http://www.flickr.com/photos/mikecogh/4848259991/.) Meanwhile enjoy this first draft ... 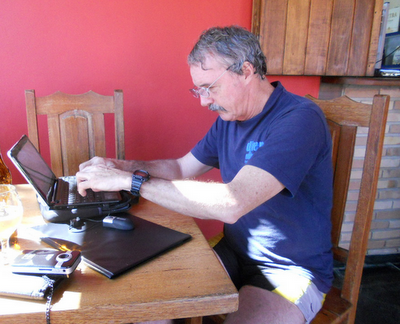 FLNW, or the Future of Learning in a Networked World, has a home: http://flnw.wikispaces.com.  According to this  URL it began with a meeting of minds not only in networked cyberspaces but in physical space in moveable feast progressing around New Zealand in 2006.  Participants in that initial encounter included Stephen Downes, Leigh Blackall, Alexander Hayes, Konrad Glogowski, Jo Kay,Teemu Leinonen, John Eyles, Rose Grozdanic, Derek Chirnside, and many others along the way, http://flnw.wikispaces.com/participants, etc.  Michael Coghlan flew over for it from Australia, and Barbara Dieu, or Bee as we know her, traveled to New Zealand all the way from Brazil.

The idea was that a group of networked educators would come together face to face and while interacting with one another, produce web-based artifacts that would allow others in the network to savour the experience vicariously.  My own take on that event at the time was to marvel at the use of tags to aggregate content, a concept that was new to me then, and that I started to understand from watching Leigh produce collages of photos from Flickr, etc. http://www.flickr.com/search/?w=all&q=flnw&m=text

Attempts to replicate the event have not been so stellar.  I participated in one in Thailand in January 2008, when John Eyles met Michael Coghlan and I in Bangkok where we met Kim Cofino, were joined by Trish Everett, and traveled on to Korat to give workshops to quite a few appreciative Thai teachers (see http://vancestevens.com/papers/index.html#080116, http://advanceducation.blogspot.com/2008/01/future-of-learning-in-networked-world.html and http://advanceducation.blogspot.com/2008_01_01_archive.html).  I had to get back to work after that, but John Eyles and others continued on to Thai TESOL in Chang Mai and on into Cambodia.  It was a form of tourism that was new to me, and I enjoyed  the feeling of contributing my expertise while being hosted to some extent (some accommodation and a few memorable meals) by colleague educators who were benefiting from what FLNW had to offer.  True to form, John, Trish, and Michael and I blogged and photographed and recorded on iRiver mp3 players and other devices and posted audio and video files online along with numerous photos and blog posts.  Kim and her colleagues at the International School of Bangkok left us full uStream recordings of our time there (I think he uStream itself has disappeared, but remnants exist here: http://mscofino.edublogs.org/2008/01/19/the-future-of-learning-in-a-networked-world/,
and http://learningnetworkedworld.blogspot.com/2008/01/isb-bkk.html)

There was an FLNW event in 2009, unfortunately for me at the end of August, right on the week that my duties at the Petroleum Institute resumed, so I missed being able to join Leigh Blackall, Sylvia Curry, Derek Chirnside, Michael Coghlan, and others for a trip to the Northwest USA, including kayak trips around Puget Sound, http://www.fullcirc.com/2008/01/14/flnw-event-january-16-drawing-together-online/.  Nancy White wrote a blog post afterwards expressing disappointment that the deep conversations and constant posting of artifacts online were taking second place to what others regarded as vacation time (having come all that way, in the summer time ;-)

So when Bee got the idea to host the 2010 FLNW in Brazil to be anchored at BrazTESOL in Sao Paulo I submitted two proposals for the conference which were both accepted.  Bee created a wiki page for the event at http://flnw.wikispaces.com/brazil complete with links  to participants and itinerary and waited for others in the group to fill in the wiki.  When Michael and I signed up she arranged what funding she could for us (in my case, a hotel room for 5 nights in Sao Paulo, highly appreciated, beats a kick in the rear :-).  Tantalizingly, a Vivo Institute in Sao Paolo was arranging an event for about that time, inviting Stephen Downes, George Siemens, and Teemu Leionen, so the ingredients were in place awaiting critical mass to kick it into gear.

But somehow the mass failed to congeal as hoped.  Scheduling problems caused Vivo to postpone their event to the following month.  No one in the movement besides Michael and I actually appeared in Brazil.  However, we turned it into an FLNW / Webheads in Action event.  Starting in Buenos Aires, we met Webheads Rita Zeinstejer and Jennifer Verschoor, president of ARCALL, and along the way picked up Paula Lesdema and Maria Laura.  We left a spirited Flickr photographic record
and on July 16 flew to Sao Paulo where Bee and her husband Pierre met us at the airport and whisked us into the countryside for a taste of rural Brazil unplugged, offline.

On Monday we returned to Sao Paulo where Bee had arranged for us to present morning and afternoon at a PCI (pre-conference institute).  I had presentations myself on Wednesday and Thursday and was mulling how to best set up an ePortfolio portal for them when on Tuesday I settled on a wiki format.  So what happened in these days is best viewed at that portal http://braz2010vance.pbworks.com/ with links from that page and from the sidebar to more information on the PCI, my demonstration of tag games Wednesday, and my talk on PLNs for educators Thursday; with photos aggregated on the tag braztesol10:

There is a link at my wiki to the next stop on the itinerary.  Casa Thomas Jefferson in Brasilia were hosting a conference on Thursday and Friday and we flew up for the second day.  We were taken to a great buffet lunch and then to a room at CTJ where our event was scheduled.  I had got my colleagues to title it "Thinking SMALL" to accommodate my new acronym for CALL, social media assisted language learning.  I don't think we actually mentioned the acronym during our presentations, which took on a sort of free-form structure, where we asked participants to tell us why they had joined us, and took it in turn from there.  As usual we took videos and pictures and posted online to leave a record of the event; e.g.

From there the FLNW crew enjoyed a Saturday with samba in Brasilia and progressed by plane on an early flight back to Sao Paulo where we arrived at Bee's flat and got onto wireless just in time to catch Claire Siskin in Pennsylvania, Anitha Devi in India, and Rick Rosenthal in Amman Jordan at the tail end of the weekly Webheads Sunday noon GMT meeting at http://tappedin.org.   We then hopped in Bee's car and drove 4 hours to the tiny bay of Toque Toque Piqueno, at a picture postcard beach house where Pierre was waiting for us with the shrimp and vegetables that would become our dinner.  Visions of wireless dancing in our heads were quickly dashed by reality, and we were forced to postpone a projected podcast with Alex Hayes and turn our attentions instead to the white sand beach with its alluring cool water for bathing.

Hopefully the future of learning in a networked world will include ubiquitous access to always-on connectivity, where bandwidth is as plentiful as water.  In our case, access to Internet, when we had it, was limited due to the incessant hospitality of the Brazilians we were with, who liked to sit for hours in restaurants, enjoying each other's company, while sipping the local beverages.

Here at Toque Toque Piqueno, where we have time but no bandwidth, I'm composing this blog post with hopes of posting it on arrival at our hotel in Paraty, where we should end up at some point today (and which SHOULD have wireless, and we'll see when we get there).

If we do find a connection, we might try to hook up with FLNW as planned, and after two nights in Paraty we'll return to Sao Paulo and go our separate ways, Michael back to Australia via Chile, Bobbi back home to UAE via Houston, and me on to Porto Seguro where I'll meet (at long last) Felix Zaniboni, one of our orginal webheads from 1998 or earlier http://prosites-vstevens.homestead.com/files/efi/efwbahia.htm. Then I'll be back in Buenos Aires on Aug 8 for a pair of talks on August 9 and 10 with webheads there, an additional day in BsAs in case anyone wants to meet me on Aug 11, or otherwise I might pop on the ferry to Uraguay for a day trip, and then I leave the FLNW trail for a brief sojourn in Peru before returning to Houston and home to Abu Dhabi to reunite with my dear wife Bobbi.

on reflection ...
No comments yet, but here's a good question:

Posted by Vance Stevens at 4:07 PM No comments: