Prensky on Interactive Whiteboards, should teachers be 'allowed' to use them?

A comment I made on Twitter raised a small flurry of tweets recently. I had been watching the interview of Marc Prensky by Gavin Dudeney here: http://iatefl.britishcouncil.org/2009/sessions/62/q-marc-prensky following Prensky's plenary at the 2009 IATEFL conference. I was multitasking at the time but I came alert when Prensky said that we shouldn't let teachers use interactive whiteboards, they should be the province of the students. Wishing to share the link to this interesting interview with my network (in only 140 characters :-), I tweeted:

#iatefl from Prensky interview: http://tinyurl.com/iatefl-p... - Teachers should NOT use interactive whiteboards, their students should!4:04 PM Apr 3rd from web

To which this reply appeared

carolrainbow@VanceS #iatefl IMHO An IWB being used well is an excellent teaching tool! Children should use as well but not have sole use :-)7:50 PM Apr 3rd from TweetDeck in reply to VanceS

To which I replied

@carolrainbow #iatefl I agree, but think value in Prensky's remark in reminding us to maximize active role of students in learning with IWBs9:15 AM Apr 4th from web

To which a flurry of tweeting followed: 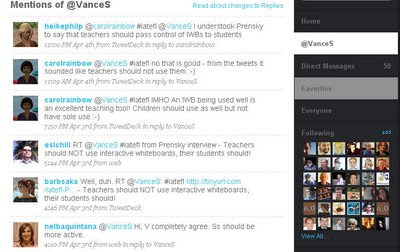 So what did Prensky actually say? This took me back to the original interview at the URL above. Prensky was saying that pedagogy needs to change in order for technology to be effective. He pointed out that technology tends to hinder the sage on the stage, whereas it facilitates the guide on the side. Therefore, he thought we need to focus more on the pedagogy in order to bring technology into classrooms. As long as teaching is rooted in the old paradigms, then technology will make slow inroads, but once the teaching changes, then technology will start to appear quickly. As it is, he said, if you have a teacher in front of a class all on laptops, and the teacher isn't engaging the students via their laptops, then the students will all be on Facebook.

At time: 16:15 in the video ...
Gavin asked him how he saw interactive whiteboards, as a help or hindrance, because they tend to push people into a certain pedagogy which is teacher fronted ...

This got me thinking of another time I was multi-tasking on my feet, back in 1985, when I wandered into a plenary at the TESOL conference in New York city, just in time to hear Stephen Kraschen suggest to the thousands of listeners present in the huge hall that "teachers erase all their current language teaching software disks and use them instead for wordprocessing" (my memory was jogged by a Google search which led me to Richard Young's CALICO Journal article Vol 5, No. 3 (March 1988), Computer-Assisted Language Learning Conversations: Negotiating an Outcome, p.65: https://www.calico.org/a-380-ComputerAssisted%20Language%20Learning%20Conversations%20Negotiating%20an%20Outcome.html). As you can imagine, this remark was taken way too literally, with some jumping to the extreme conclusion that no CALL software was worth the mylar it was written on.

Kraschen has since been understood to have over-reached himself with his notions of comprehensible input, the idea of i+1, which was an excellent idea, and one that makes a lot of practical sense, but which was on examination found to have no actual research base (so?? it favorably guided the practice of quite a lot of teachers nevertheless!). Another such notion that had also got its author in difficulties was Chomsky's suggestion that there was a black box in our brains where language processing took place. Many autopsies later, when no such box could be found, this notion was raised by Chomsky's detractors, who had already carried the great man's ideas into transformational grammars and down essentially non-communicative garden paths.

Prensky too could fall victim to the great success of his notion of digital natives and digital immigrants. Some are now questioning whether people actually break down into such groups, leading Gavin to suggest in his interview that the native/immigrant distinction might be reaching its 'shelf-life'.

But here again, these are all marvelous notions, and whether or not they stand to scrutiny under close inspection, they all get us thinking. Whether they were literally correct or not is beside the point, I think. Prensky's role as a change agent is to move us all along the path of paradigm shift. For that to happen, for the pedagogy to change as he says it needs to, teachers have to change their practice, and for this to happen they have to reflect and internalize the many discreet shifts that will lead them toward some major revelation that invokes the change.

This then is one great affordance of our blog and Twitter network, a medium through which we can keep these ideas percolating, and move more and more of us over the chasm that will allow all teachers to become effective interactive whiteboard users, with fully engaged students.

Are you there yet? Are we there yet? What is holding us back? Let's think about it ...
Posted by Vance Stevens at 3:35 AM

Thanks for the post and thank you for discussing this.

I also had these many questions to Prensky and asked them directly to him using the email he mentioned on a slideshare presentation which I accidentally held for being the very same presentation that he held in Cardiff.
http://www.slideshare.net/HandheldLearning/marc-prensky-keynote

This mistake plus the fact that two of his presentations were not streamed (only the interview) and lots and lots of Tweets about what Presky was saying led to a whole lot of confusion.

At least this is what it seemed to have been because Prensky in his email to me then stated that he thinks I got things badly wrong because a) either I was not there or b) I was there but busy twittering instead of listening.

So, I told him that I was not there and only one of the online participants and am now awaiting the recordings because as Prensky rightly said, that I seemed to have misunderstood things and 'took out of context'.

Very humbly, having read this minute report Vance made so conscientiously on ideas and opinions well-known names provided online, I can just say, after almost 40 years teaching the English language along the same lines with textbooks and recorded passive samples of grammar-geared activities, that many colleagues all around the world are already feeling the need of an educational change involving a radical paradigm shift. We are going through a process which will take some time to take roots, and lots of inquisitive minds to explore and discover, to ponder and try out. We are all anxious to see those changes become a reality during our life time, but this is still the beginning, since not only educatores and students, but also authotities and parents need to feel the need of a change and welcome a new stage in the history of education, which has been passed on from generation to generation with practically no changes in that students have never taken the lead in their own instruction.
Thank you very much, Vance Stevens, for starting the ball rolling some ten years ago, and for consistently kicking it off with unshakeable conviction.