Updated May 11, 2021
This posting encapsulates, but in May 2021 updates, my remarks at a colloquium entitled: Global and local visions: Evolving communities of practice Panelists: Vance Stevens, Suresh Canagarajah, Jane Hoelker, Yuko Goto-Butler, Takako Nishino, Perin Jusara, Golge Seferoglu, and Toni Hull, presented March 27 at the annual international in TESOL conference in Denver (Stevens, 2020)
The abstract for the colloquium was: Whether learning or teaching English in the EFL context, the model of Communities of Practice moves individuals and groups forward in their development. Examples of shared practices implemented in elementary, secondary and tertiary institutions as well as in programs of teacher professional development conducted on worldwide communication networks are discussed.
My contribution was entitled "The Webheads and Distributed Communities of Practice"
Abstract for my presentation: In these times of globalization and worldwide communication networks, distributed communities of practice (e.g. any CoP that cannot rely on face-to-face meetings and interactions as its primary vehicle for connecting members) are becoming more common. The concept of distributed CoPs has been addressed by Etienne Wenger. This presentation discusses CoPs implemented for educational technology specialists, many particularly concerned with language learning, in ongoing teacher professional development, foremost through Webheads in Action and in various other communities and offshoots from these, such as TESOL-sponsored EVO (Electronic Village Online). How Wenger’s concept of CoPs has evolved after his encounter with the Webheads online will also be discussed.
In my talk I didn’t rehash a definition of communities of practice except to mention that they are most frequently understood, as defined by Etienne Wenger, to:
Wenger further characterizes distributed CoPs as, among other things, having a particular space to interact in. Not many of Wenger’s writings are available (for free) online, but these include:
The ostensible purpose of my talk was to explore where Webheads intersects with these characteristics of communities of practice. Webheads in Action, http://webheads.info, was formed as a 2002 session of EVO (TESOL sponsored 6-week courses given free each year via Electronic Village Online, http://evosessions.pbwiki.com/). Webheads membership has since increased to many hundreds of educators who engage in helping each other pursue lifelong, just-in-time, informal learning through experimentation in use of social-media and computer mediated communications tools. Among its accomplishments, the Webheads community has already mounted two free international online conferences, the Webheads in Action Online Convergences (WiAOC 2005 and 2007) with a third coming up this May 22-24, 2009 - see http://vancestevens.com/papers/evonline2002/wiaoc_index.htm and http://webheadsinaction.ning.com/ (free no longer supported but content from 2009 ported to Wordpress and stumbled on unawares May 12, 2021 :-)
The question I addressed in my talk was, is Webheads a group, a community, or a network? In formulating my arguments I made a distinction between groups, communities, communities of practice, and networks, as illustrated on the diagrams in slides 6 through 10 in my slide show: http://www.slideshare.net/vances/the-webheads-and-distributed-communities-of-practice
(To see these effectively, go directly to https://www.slideshare.net/vances/the-webheads-and-distributed-communities-of-practice/6 in the slide show above and then scroll through to https://www.slideshare.net/vances/the-webheads-and-distributed-communities-of-practice/10)
Groups
A group is a gathering of people. It could be a mob or a friendly gathering at a pub. The impetus for its formation is chance or convenience; e.g. people walking near one another in a park, people who come together to observe a sporting event, or students who are grouped in furtherance of class logistics. Downes makes further distinctions in a presentation anticipating my progression here of configurations from groups --> communities --> communities of practice --> and then to networks. 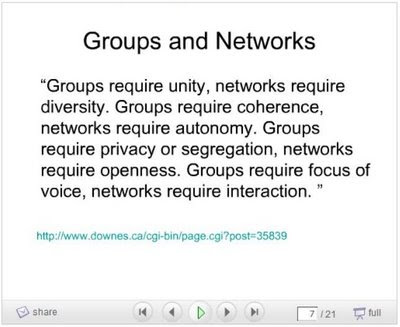 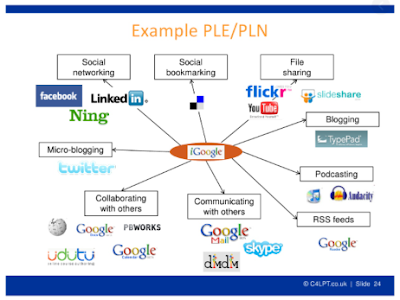 An example PLN diagram from Jane Hart (2009), Slide 25 here:
https://www.slideshare.net/janehart/ilta-keynote/24-ExamplePLEPLN_Social_Social_File_networking
I finished my talk by asking which construct of knowledge distribution was more productive, communities or networks? I answered rhetorically that perhaps this was a matter of scale, where networks can handle an almost infinite number of participants. The evolution of Webheads is instructive. Seen as a community, members interact within the domain of practice. Networks imply more widespread, perhaps opportunistic, contacts, with looser characterization of domains and practices. So which is more productive? Given the spontaneous and voluntary nature of such constructs, the answer is ‘whatever works’ and therefore probably moot.

Cormier, D. (2008). Rhizomatic Education: Community as Curriculum. This paper in another one for the lost and found. When Innovate: Journal of Online Education went 'out of print' Dave moved it to his blog: http://davecormier.com/edblog/2008/06/03/rhizomatic-education-community-as-curriculum/. If can also be found on Research Gate with forthright  coda regarding what Graham Davies used to call 'link rot': https://www.researchgate.net/publication/234577448_Rhizomatic_Education_Community_as_Curriculum (both articles retrieved as indicated on May 11, 2021).
Downes, S. 2001-2008. E-learning 2.0. eLearn Magazine, retrieved May 11, 2021 from https://elearnmag.acm.org/featured.cfm?aid=1104968
Downes, S. (2005). An Introduction to Connective Knowledge. Stephen’s Web, http://www.downes.ca/cgi-bin/page.cgi?post=33034 Johnson, C. 2005. Establishing an Online Community of Practice for Instructors of English as a Foreign Language. Doctoral dissertation. Nova Southeastern University. Retrieved from NSUWorks, Graduate School of Computer and Information (614). Sciences. https://nsuworks.nova.edu/gscis_etd/614.   Retrieved May 10, 2021
Siemens, G. (2004). Connectivism: A Learning Theory for the Digital Age. This paper disappeared temporarily when Elearnspace did, but it is easily found on online. Here's a version with a 2005 update of an accompanying website, https://www.academia.edu/2857071/Connectivism, retrieved May 11, 2021. You can use ctrl-F to find the 'pipes' quote; to hard to track in-text as the papers move about).
Siemens, G. (2006). Knowing Knowledge. Ebook available via Creative Commons license, but no longer on eLearnspace. On May 11, 2021, you can try here, https://amysmooc.files.wordpress.com/2013/01/knowingknowledge_lowres-1.pdf, or the Internet Archive, https://archive.org/details/KnowingKnowledge/page/n127/mode/2up
Stevens, V. (2009). Modeling Social Media in Groups, Communities, and Networks. TESL-EJ, 13(3). http://www.tesl-ej.org/wordpress/past-issues/volume13/ej51/ej51int/
It received positive feedback from Russell Stannard who commented

This blog post was an precursor version of the article that appeared in the Dec 2009 issue of TESL-EJ, above. The TESL-EJ article is more refined in prose, though for obvious reasons, not updated in links as has been possible in May 2021, in the blog post you are reading here
Stevens, V. (2010). Webheads and Distributed Communities of Practice. In Canagarajah, S., Stevens, V., Nishino, T., & Hoelker, J. (EFLIS Academic Session 2010). Global and Local Perspectives: Evolving Communities of Practice in EFL. EFLIS News, 9(1). https://www.tesol.org/news-landing-page/2011/11/08/eflis-news-volume-9-1-(march-2010)
Update: This article was updated at the invitation of Jane Hoelker on behalf of the editors of the EFL IS Newsletter, who published a summary of the EFL Academic Session from Denver TESOL 2009. The article is at this link (on May 11, 2021) https://www.tesol.org/news-landing-page/2011/11/08/eflis-news-volume-9-1-(march-2010), though the bookmark to "Articles: EFLIS Academic Session 2009. Global and Local Perspectives: Evolving Communities of Practice in EFL"  does not work.
My part of the article (October 2009) resides online at http://tinyurl.com/vance2009denver
Wenger, E. Richard McDermott, R., & Snyder, W.M.. (2002). Cultivating communities of practice. Boston: Harvard Business School Press. 284 pages.
Wenmoth, Derek. (2008). Holding a Mirror to our Professional Practice. Keynote address given at the K12 Online Conference 2008, http://k12onlineconference.org/?p=181
Further update May 11, 2021 - links checked and updated as indicated
Posted by Vance Stevens at 3:28 PM

Excellent post... I'm familiar with some of the work you cited, but by no means all of it. I've just put up a link to this on my own blog, hope you don't mind...

After reading the posting and viewing the slide show - I think I would like to add one more point: the acceptability of the in and out nature of the CoP. You are not either in or out, so to speak. You are there when you can and want to be and gone but not forgotten when other demands lead you elsewhere. Fluidity among members yet with a solid core of principles and, perhaps, folks, are integral to the CoP.
Laine

Thanks Laine for the comments and Darren for the post at http://teacherdevelopment.tumblr.com/post/93391351/advanceducation.

Downes draws these two quotes from the article: "The community aspect refers to the development of a shared identity around a topic or set of challenges." And "the danger of network is noise and diffusion.... the challenge of network is that it requires a strong sense of direction on the part of individuals."

Yes, and many more insights in this insightful work, including yet another concise and quotable definition of a CoP as "a learning partnership among people who find it useful to learn from and with each other about a particular domain."

thnx for the information..
blog is really gud.Help my india is the World Best Forum and Blogging Site which provides the all category of forum and blogging and Social Community site.