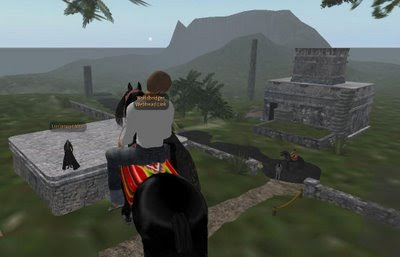 Webheads in action have once again invented an online phenomenon. SpeedLifing is an offshoot of SpeedGeeking http://en.wikipedia.org/wiki/Speed_Geeking, which Kim Cofino and Jeff Utecht mentioned in their excellent presentation at WiAOC http://webheadsinaction.org/node/364, and in this blog post: http://mscofino.edublogs.org/2009/04/05/take-your-faculty-speedgeeking/

This got Webheads thinking we could try the technique, so we decided to do it in Elluminate http://tinyurl.com/y3eh starting at 13:00 GMT June 14, 2009. There's more information at our wiki http://wiaoc09.pbworks.com/SpeedGeeking

SpeedGeeking is where a lot of participants show up and move at a signal from one presentation to another. The presenters keep repeating their presentations. In Online SpeedGeeking as Webheads will attempt it we will rotate presentations through our Elluminate presentation room at http://tinyurl.com/y3eh. Elluminate has a countdown timer. We'll set it to countdown 5 minutes. The SpeedGeeker's task is to present cogently and concisely on a topic of choice (non-commercial of course :-) in just 5 minutes. Anyone can present. Scope of topic is up to individual presenters, as long as the topic is covered in 5 min. Anyone interested can sign up at the wiki.

At our usual Webheads Sunday noon GMT chat on May 31 , someone had some questions about Second Life, so we decided to meet in SL the following week June 7

It gradually dawned on us, why not try a similar format in SL? We put the event down on our wiki page and invited people to show us their favorite places there, with the caveat that each tour would last 5 or ten minutes. We thought we could get people into SL, exchange friendships, and teleport each other from place to place. And guess what? It worked, and it was F.U.N.

On the day of the event, we had only two presenters who had signed up.

But it turned out that a lot of webheads appeared at http://tappedin.org/ between noon and 13:00 expecting the event to take place.

Doris Molero had come online for another reason and wanted take some pictures of me in Second Life to accompany an interview that she had conducted (and which I blogged here: http://tinyurl.com/090522molero). I said fine but in return she had to show us her favorite places in Second Life.

She took us to the Great Wall of Mao (85, 85, 36) and then to a Japanese village with the name Kansai in it (looking for it now, can't seem to relocate it, one of many builds containing the name Kansai). In Kansai Doris found a lovely kimono but the guys in the group could find no clothes, so we went off in search of men's clothing elsewhere, and ended up at Amity Island (116, 95, 23).

By then we had attracted a crowd, including Nina who conducted us to Ruta Maya, Mexico 2 (187, 25, 21). This turned out to be a charming place where we could 'rent' horses (for free) by touching them and then 'wearing' them. So we rode horses around the build, the beach, and the old ruins there.

The charm was somewhat compromised by a villain who appeared by name of Lucianopt Vita. This character first disrupted our outing with a confusing holodeck which scattered our avatars. He followed us to the ruins where he created storms and grey-outs, and then wrought a tornado that blew trees and telephone poles crashing around us. He can be seen in the picture above conjuring up his next episode. (I wonder if it was he who killed Mike Marzio's horse?)

Fortunately no one got hurt and we all escaped to Webheads Headquarters at EduNation III (72, 36, 21). There the tour ended. But it was interesting, all aboard enjoyed it, and we must do it again sometime.
Posted by Vance Stevens at 4:00 AM