Social Networking for students and teachers who only know Facebook

Struggling with my muses on a challenging project, I confided in a Facebook update: "I'm trying to write teaching materials to explain social networking to students and teachers who know little about the topic beyond Facebook. It's difficult."

To my surprise my off-the-cuff remark brought numerous comments (my social network in support; thanks, social network :-)). I decided that these responses deserved more elaboration than would be possible in a comment on my own status update (hence, this blog post).

Basically I'm trying to update what my colleagues and I have been teaching as "computer literacy" for the past several years. Our students' sophistication with computers changes year to year, and what seemed reasonable five years ago as an introduction to computing might seem simplistic and outmoded today.

I was fortunate to have been given the opportunity to revise some of the materials we introduce to students as "computer literacy" and thus articulate some of the concepts which I think our students should be aware of in order to consider themselves technologically literate in the 21st century, where there is general agreement among educators who concern themselves with such matters that a new skill set is emerging to prepare young people to be able to adapt to “jobs that haven’t been invented yet.”

My materials include a lesson on Google Docs (a popular example of doing in the ‘cloud’ something we have till recently been doing almost exclusively on our PC’s). This lesson also gets the students into the Google system, which they’ll need for the lessons involving Google Reader.

Google Reader is one of the topics in my lessons on Social Networking. These lessons focus on three key concepts: RSS, tagging, and aggregation.

The first lesson has us taking a look at aggregation, an excellent illustration of which can be found at http://addictomatic.com/. I have our students put in ADNOC and OPEC as these are safe and also could lead to a discussion of how this works (if students explore some of the aggregators used, which reveals a lot about what aggregators there are and how they work).

In the second lesson we have a look at blogs, but as observers only. It seems unreasonable to require teachers to themselves create blogs in such a short time, though this could be a technique any teacher could use to work with students on these materials. As observers we follow blogs through their RSS feeds, so I’m suggesting some blogs I hope will intrigue our students. I also have some practical examples of RSS at work (RSS is a KEY concept, absolutely essential).

Another key concept is that of tagging. For this I use Delicious, adapting materials I've already created some time ago.

This brings me to the last lesson. I was thinking of a lesson on how to develop a network of worthy peers. Social Networking is much talked about, I heard the term repeatedly on mainstream TV news just this morning, on both Al Jazeera and BBC. So I think students and teachers might be primed to learn more about it, but the hurdle for most people (the trick, or the hard part) is seeding that network in such a way that it develops into something that will feed you the kind of information that will transform your learning (which is what some people say it does).

One web application that’s having a great impact on information dissemination is Twitter. I’m thinking at the moment to create that final lesson on Twitter. Again this would iinvolve students as observers (in illustration of concepts introduced here). It wouldn't be necessary for our teachers or students to create their own Twitter accounts but they would be able to see other people’s Ttwitter streams and follow those in RSS and tag them in Delicious.

In both blogs and Twitter you can see where people who have interesting things to say are getting their information. This is in fact how you leverage your own network, since you can find others whose blogs and Twitter feeds you can explore. My post just previous to this one (http://advanceducation.blogspot.com/2009/08/new-webheads.html) described how Twitter Mosaic could be used to plumb the networks of other respected colleagues, who could in turn plumb yours.

I published this post on August 27, 2009. Meanwhile I got this from my Twitter stream, which I can't possibly absorb in its entirety but which I pop into now and then for whatever pearls have been cast before me and frequently emerge with something spot on. This is an article published September 1 in Times Higher Education on exactly the topic I'm getting at here. As Russell Stannard explains, "The idea of Twitter is to network with other people who are working in the same area as you. You send 'tweets' of interesting articles, websites and the like, and you receive similar tweets from the people you follow. Soon your Twitter account becomes a constant flow of interesting information from people who are plugged into your area. So how do you create these networks? It’s probably here where most people stumble. The easiest way to build up your contacts is to 'piggyback'. You search for well-known people who are working in your area then click on all their followers. You can guess that most of the people who follow them will be interested in similar things to you." http://www.timeshighereducation.co.uk/story.asp?sectioncode=26&storycode=407984&c=2

I couldn't have said it better myself! Thus your network is seeded, and it flourishes when you start interacting with it (going from passive to active would be the next step, but is outside the scope of my too brief introduction).

Icing on the cake: I see from my Twitter feed Sept 2, 2009 that colleagues in my network are actually reading this article. Thanks Cristina, and others re-tweeting! 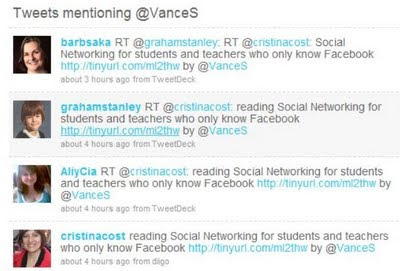 
I've published the materials I alluded to here and I'm ready to share the URLs.
Basic Computer Literacy: http://issuu.com/vances/docs/computer_literacy_2009_lessons_1-3
Social Networking: http://issuu.com/vances/docs/social_networking_2009_lessons1-3
I'd appreciate any feedback, but keep in mind that they are pitched at my work context of EFL students just entering college. The materials are meant to be used in a classroom context where video media cannot be counted on to function, and pitched at students AND teachers who are only slowly emerging from a paper-based and teacher-centric pedagogical environment. That latter stipulation means that for the teachers themselves this is their first contact with some of the concepts here and they can't be made to feel that they are fish out of water when 'teaching' to a class of students who are in general have not embraced web 2.0 and social networking. So for people already learning through social networks, it's scaled back a bit, but I'm sharing in case you have a need for such materials, and also in case you might give me ideas for improvement.
Also I was working on a 4th lesson in social networking, "Starting your own network," when I ran out of time (I needed to get the materials into teacher and student hands AND realized teachers would run out of time in the 3 weeks allocated to the course originally). However, I plan to add that fourth unit at a later date. An inkling of what is to come can be found here: http://advanceducation.blogspot.com/2009/08/new-webheads.html

Posted by Vance Stevens at 7:14 PM

At least computer literacy is needed to the teachers and student then there nothing difficult to learn social networking for teachers .