The founder of the concept for teaching (drawing on the film genre) is Scott Thornbury, and its minimalist essence is captured in the front page of this website: http://www.thornburyscott.com/tu/portal.htm (with links to a longer article on "teaching unplugged").  There's a Wikipedia entry on Dogme here: http://en.wikipedia.org/wiki/Dogme_language_teaching, where it states succinctly that "Dogme is a communicative approach to language teaching and encourages teaching without published textbooks and instead focusing on conversational communication among the learners and the teacher."

Now, what got me started on this posting was Karen Sylvester's tweet, here:
http://twitter.com/kalinagoenglish/status/7784038613 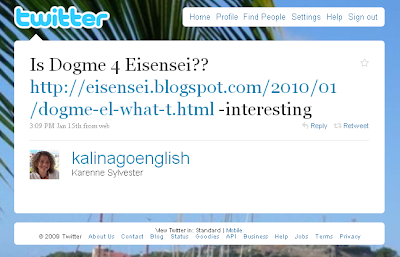 
"Ok, here's Dogme from the perspective of teaching some other language as a foreign language. I wrote an article here Stevens, Vance. 2006. Learner strategies at the interface: Computer-assisted language learning meets computer-mediated communication. In Handbook for Arabic Language Teaching Professionals in the 21st Century, Kassem Wahba, Zeinab Taha, and Liz England (Eds.). Lawrence Erlbaum Associates, Inc., a pre-publication version of which I put online here: http://www.homestead.com/prosites-vstevens/files/efi/papers/cairo2004/hbalt-gvs05sep.htm At that URL, scroll to just above and below the section "A syllabus for language learning". I think that's Dogme."

I'd like to reproduce here what I said in that article, regarding my experiences in learning Arabic unplugged.  The teacher referred to below as "Salem" is in fact the best Arabic teacher I ever had, Haridi Salim, and is still in touch with me from time to time from Cairo:

"...  students made no elaborate preparations but spontaneously brought realia to the class. Simply put, the only operative rule was "No English, Only Arabic." We formed classes of students who would follow this rule. Salem, whose other classes were conducted in more traditional vein, often remarked about how much he was learning about language teaching through the experience of working with us. We were all learning that authentic materials were more motivating than traditional ones and that communicative approaches allowed us to use what Pinker (1994) called our "language instinct' to efficiently learn the language. This efficiency was also improved by focusing our concentration on Arabic, allowing us to actually think in that language, and cutting out the factor of code switching that constantly throws students off in bilingual language classes. We were learning what we needed to know about creating materials once the technology caught up with our need to find and present authentic language learning materials in Arabic.

A syllabus for language learning

This section elaborates on the idealized syllabus for learning a language such as Arabic and how it can be augmented with technology. The syllabus accrues from experiences with "'Salem"' described above and can be minimalistically characterised as finding teachers who will use only Arabic in class (spoken and written) and putting them before students who agree to read, speak, and write the same. I have had the opportunity to replicate this configuration in two learning situations since that time and in both instances, the technique was markedly effective with small groups of students who self-selected to learn on these principles.

However, creating such a pure and facilitative learning environment in an Arabic class is not easy in practice. I have faced problems with Arabic teachers who are not convinced teaching with only discourse in their target language is possible. They feel that students' first- language support is necessary and they tend to over-use it, thus suppressing opportunities for students to internalize patterns discernible from rich target language input. I have known Arabic teachers who refuse to teach Arabic script in the belief that this would be too great a leap for their students. However, the converse is true: using student-language emulations of target language features often disguises the patterns inherent in the target language and can actually hinder the learning of the language through elucidation of it's otherwise predictable features.

Once all concerned agree to learn and work in Arabic only and settle on a time to meet regularly, finding things to do in the class has never been a problem when the students are encouraged to raise topics for class discussion. They have the essential ingredients for good language learning; namely, an informant, a commitment on the part of students to digest the material, and materials proposed by and therefore relevant to the students themselves. The classes I've experienced have all gone well ala munasib (according to the occasion) but both students and teachers must seed discussion and activities."

Ironically that article is about teaching "plugged", not "unplugged".  The latter term I know means (in music) without relying on electronic enhancements, but the article itself is about how technology can enhance the dogme approach.  As I say in its conclusion, it shows:


"...how instructional technology supports current trends in language teaching methodology by allowing students to engage in meaningful, authentic, and truly communicative activities that enhance their ability to learn languages such as Arabic through the use of the Internet.. Computers have allowed the achievement of constructivist outcomes by facilitating the establishment of learning environments which have moved:

Graham Stanley, Dennis Newson and Gavin Dudeney are all vocal protagonists of dogme, and enthusiastic teachers, learners, and builders in Second Life, so I'm sure there are no real implication in the term "unplugged" that teachers should eschew educational technology (after all, unplugged musicians use microphones and sound systems that project what they do onstage to the far corners of concert halls; or in cinematic terms, even the most purist dogme director would still use hi-tech cameras), but I wish here to drive home the point nevertheless, that technology is capable of enhancing what Thornbury declares is the thrust of dogme: "to restore teaching to its pre-method 'state of grace' - when all there was was a room with a few chairs, a blackboard, a teacher and some students, and where learning was jointly constructed out of the talk that evolved in that simplest, and most prototypical of situations." Why not, then, a few rezzed furniture objects embedded in a holodeck in Second Life, that do marvelous things when clicked on, giving learners that much more to wonder at and talk about?

I love your Voki! I'm intrigued by the dogme concept (but constrained by the necessity to work with textbooks at both my jobs). Using a book is definitely easier on the teacher and requires less initiative (never my strong point) and creativity. Also how would it work when teaching academic writing skills is needed? Is dogme only for the spoken language? When I have students choose their own book for pleasure reading and bring their questions to me (which I answer in English, that being our only common means of expression), am I using dogme?

I was thrilled when I discovered the Dogme group, because (as I understand DogmeEFL)I found that it conceptualised the kind of student-led teaching I had drifed into thanks to years of experience. However - it seems to me a). that it needs just that - years of experience, and b). that the border-line between Dogme (which requires considerable follow-up AFTER the lesson) and lazy teaching is quite thin.
However, it seems to me that the question of using (occasional) L1 in the classroom and the Dogme approach is two different things - depending on the level of the learners etc. ... or is it that I do NOT understand what Dogme is after all ?