This is the blog post I intended to fire off after the last TESOL Arabia conference March 11-13 at Zayed University in Dubai.  I made a presentation there that I did not complete.  The part I gave was recorded here: http://tinyurl.com/100312vance-dubai.  The slides of all I had intended to say are here: http://www.slideshare.net/vances/nurturing-your-pln-for-everyones-ongoing-professional-development. Since they were posted online they have been favorited by a number of people :-) 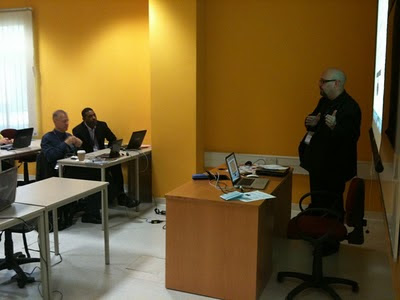 http://twitter.com/VanceS/status/10410955223 shows the above Twitpic of Gavin Dudeney presenting at TESOL Arabia, Dubai, March 13, 2010.  I took the pic on my iPhone during his presentation, Twitpic'd it, and Gavin showed it to his audience when he checked his Twitter feed 5 minutes later in his presentation.
TESOL Arabia conferences in the UAE have not historically been well connected.  Often they are held in hotels where there may be wireless only in the lobby, or perhaps even in some of the presentation rooms, but in all venues presenters could expect connectivity to be patchy to non-existent.  Certainly you wouldn't plan to rely on an internet connection under such conditions, and so I arrived at TESOL Arabia this year with a PowerPoint presentation safely stored on my laptop and backed up to a flash drive, having made no preparation for delivering it to anyone beyond the brick and mortar campus at ZU apart from a mere mention on my PLN that I might try to webcast from there.

The part of the presentation that I didn't give because I ran out of time was to be a complaint against conferences which forced participants to remove themselves from their networks (fortunately, not an issue at this happily interconnected conference in Dubai - the only issue was that hardly anyone was using the connectivity; but that's the next step beyond the scope of this post, and something I hope to address in a TESOL Arabia chapter presentation from Abu Dhabi April 10, 2010; preliminary info at: http://bit.ly/Apr10_prez_TA_Auh).

As I ran out of time, I was leading to the question of what TESOL Arabia, or any viable configuration of practitioners interested in futhering their professional development, is or should be.  To arrive at what I was leading up to I had presented a distinction between groups, communities, and networks, and was showing how knowledge resides in networks and is passed around the network through modeling and demonstrating practical applications of knowledge applied to practice. In this model of how knowledge is disseminated in the 21st century, I suggest that it is never appropriate to cut anyone, at any time, students in class, participants at a conference, or knowledge workers attending meetings, off from their networks.

As most of us agree that learning is mainly social, such conferences seem most appreciated for their networking potentials rather than for the papers presented there, which more and more often can be read or their recordings viewed online, as archives of such materials become more and more widely distributed. Travel to distant cities to participate on site in conferences has become inefficient and less necessary than before, and is less crucial for gaining knowledge than opportunities available in cyberspaces dedicated to education.  Accordingly, one can argue that face-to-face meetings (in the workplace) risk a similar obsolescence, or that the notion of forcing students to attend classes is becoming archaic when podcasts of lectures are available, and indeed interaction around their subject matter can be made more rewarding using a combination of synchronous and asynchronous online resources.

In other words, to face-to-face gatherings, add a networked dimension.  Hold the meeting, or conference, or class in a brick and mortar edifice as usual, but configure the space so that it lets in the network. Now you have the best of all worlds that blended learning has to offer.  Participants in the physical spaces are able to look each other in the eye and benefit from each other's company, but they can share what they are doing with the wider world, or draw in people and resources from their PLNs or personal learning networks. In this way consumers of content at a face-to-face gathering can generate content online, and as this content is reflected on, remixed, and recycled, and filtered back to participants either physically at or virtually enjoying the live event, everyone involved would be learning more than they possibly could if the event were cut off from the networks of those who participated.

There is opposition to this notion. Wide Web of diversions gets laptops evicted from lecture halls face-to-face 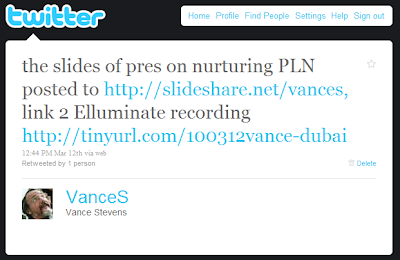 The point I'm making here is that this is the way conferences should be.  We shouldn't all have to leave our networks at the door, or at home, or wherever the last hotspot was.  Face-to-face conferences are augmented by connectivity and backchanneling among participants, as are our classrooms.

This is another important point: how we connect at conferences is how we connect in real life.  And that should carry over to how we connect with students and they with us and how we all connect with peers both face-to-face and online.  Conferences are places we go to network and to learn.  As I pointed out in my presentation, echoing Stephen Downes, teaching is modeling and demonstrating.  This is what we should be doing at our conferences, modeling the tools we can use with each other and YES with students.  None of this connectivity should be blocked or suppressed.  The Washington Post article referenced earlier may indicate an attention deficite disorder inherent in multitasking but it also reveals a phase through which we all must pass.

As a teenager I used to show off to peers by driving fast and irresponsibly, in an era where seatbelts were not the norm.  Now in the UAE I see much evidence of this same lack of sophistication. But we all grow out of it.  We educate one another how to maximize the potentials of the technologies we harness while avoiding the pitfalls that many of us toy with when the technlogy is new to us.  In other words, if people are checking cell phone messages in class or meetings, diverting attention from the meeting itself, they are hopefully going through a temporary phase.  In time it will become understood that there is a time and place for that.

It used to be that in my classes students would sneak onto MSN messenger.  Now they almost never do that. These days they might switch in and out of Facebook, but Facebook is less intrusive.  Use of mobiles is more of a problem now, but in time we will have learned how to use them appropriately to effectively leverage our learning by widening our networks and accessing data needed for class or workplace intelligence. (Actually I found today two of my students on MSN, but it turned out they were in communication with each other, back-channeling in the classroom. I thought that this was an appropriate use of the tool).

I remember one time Gavin mentioned in a recorded presentation his discomfort with people interacting with their media while he was presenting, but now I'm glad to see that he has his iPhone and laptop with him and happily uses them in enjoyment of always-on connectivity. The back channel at the conference was all aTwitter.  At one point Gavin asked his Twitter network for advice on what to do evenings in Dubai, and I rose to the occasion with the definitive 140-character travel guide for Dubai: "@dudeneyge in Dubai, go to the creek, cross it in an abra, walk through the souks at either end of the abra ride, Deira & Bur Dubai, & dhows" <http://twitter.com/VanceS/status/10368130620>.  I don't know if Gavin ever got the chance to actually follow my itinerary, but at least he and hundreds of my followers were 140 characters wiser for what Gavin was missing.

That's how knowledge spreads throughout a network, and what we should see a lot more of at face-to-face conferences, wherever they are held, although where they are actually held is getting to be increasingly irrelevant in our increasingly networked world.

PS: I just stumbled on Terry Freedman's compilation of resources at http://www.ictineducation.org/free-stuff/ and found there an article on "What I look for in a conference". On the wish list is "#7 I wanna be connected: The best conference will have wi-fi throughout the venue, including the hotel. There must also be a conference Twitter feed, and Flickr and Technorati tags."  Indeed.

Nice write-up, and it was a pleasure to see you in Dubai. My issue with peole interacting with media was more about people taking phone calls (in real life) or playing with my slide projector (in Second Life). I've never had a problem with people using laptops or mobile phones for access to other people and information - but speaking on the phone in conferences strikes me as a bit much, as does advancing my slides in public while I'm talking... :-)

Good to have that clarification, Gavin. Those cases you mention do seem a bit extreme. Great to see you in Dubai!

Hi, Vance, TESOL Arabia was advertised everywhere. I had a chance to visit Zayed U in Dubai and agree with you that it is a nice campus. I went there for a counseling practicum site visit. Actually I was glad that I had a chance to drive around (several Emirates)for that job. Very tiresome (got lost all the time), but got to see lots of places and connect with people.