Modeling your PLN: Backchanneling with Students

When many of us think about PLN, or Personal Learning Network, what we envisage involves colleagues sharing information in a social network or community of practice (see http://delicious.com/vancestevens/PLN and http://delicious.com/vancestevens/PLE for numerous examples; and I've always liked Scott Leslie's nice collection of PLE diagrams: http://edtechpost.wikispaces.com/PLE+Diagrams.

We less often think about setting up PLN's with students, but at http://tinyurl.com/vance-socialnet09 I list one of the ten paradigm shifts that I think educators must make as they move into facilitating learning in the 21st century as being "transfer [or] using technology and social media in one walk of life and then transferring those heuristics for learning into the classroom and other teaching situations. For example, people who frequently use Facebook or Twitter might tend not to use social networking or backchanneling in the classroom, because they don't see how to transfer what they do in one part of their life to how they manage their more formal teaching and learning environment, because it's not in the curriculum, etc."

Educators backchannel through their PLNs but in fact we should all be doing this with students (see "Where 3 R's meet 3 C's" about what we should be teaching as 21st century life skills: creativity, communication, collaboration - http://www.britannica.com/bps/additionalcontent/18/34037342/The-Three-Rs-Meet-the-Three-Cs). We should be modeling how we network in order to show students how they can do the same in order to become productive knowledge workers in those jobs in the future that haven't been invented yet, as articulated in http://webheadlink.wordpress.com/2007/01/08/jobs-that-havent-been-invented-yet/.

The problem is where networks might collide, as when we mix our social networks on Facebook or Twitter with the very different worlds of our students, and risk distracting clutter in our professional networks if students are allowed into them, or suspicion of impropriety at worst.

Twitter itself has introduced a solution: LISTS. Now you can create a list for your students or separate classes of students and add them to the appropriate list without having to "follow" them. In this way, they don't appear in your Twitter stream, but you can open a LIST and catch up with what they are up to that way.

There are other means of backchanneling in classrooms. Edmodo is one which I have used with students. It works well if people in the class monitor it, but the problem is, it isn't 'real'. We go to Twitter every day in the course of our normal workflow. You check Edmodo only when it occurs to you. Your students do the same. It lacks traction. But many teachers use it as a backchannel tool similar to Twitter, and because you need a code to join a group, it's safe for students.

Another good backchannel tool is Etherpad. This tool was so good that Google bought it to use its technology in Wave. Consequently the tool at http://etherpad.com is shutting down this month (http://etherpad.com/ep/blog/posts/transition-update). However its code has been released as opensource (http://code.google.com/p/etherpad/) so it has already been resurrected in other implementations, and its code will live on as part of Google Wave, which could serve as a model for backchanneling with students or on any kind of project in their productive lives in the future (though a tool that would be effective with students needs to be a lot simpler to use than Wave is right now).

You can use Delicious or Twitter or Google to find other sites that have used the Etherpad code already; e.g. http://twitter.com/#search?q=etherpad and http://delicious.com/tag/etherpad. Readers of this post could help one another by leaving links in comments below to sites that use the Etherpad code; for example: http://piratepad.net/ and http://typewith.me/.

As to why we'd want to backchannel with students, I've found a couple of articles that explain the rationale and suggest some tools:
This posting derives directly from my PLN.  It was originally a response to Lori Teng's comment on my post in one of my other blogs here: http://justcurious.posterous.com/how-to-start-your-pln-on-twitter.  If Lori hadn't commented on that post, and triggered in my brain all the synapses there I'd been storing up related to backchanneling with students, this article would never have been written.

This post therefore is yet another example of how a PLN works to cause us to model and demonstrate for one another, to reflect on and practice what we are learning, and to percolate how we develop our knowledge back into our communities and networks in an ongoing process of lifelong learning.

NOTES:
This post figured into a presentation I gave for a TESOL Arabia chapter event April 10, 2010.  The blog posting for that event, including a link to its recording, is here:
http://justcurious.posterous.com/modeling-and-demonstrating-professional-devel 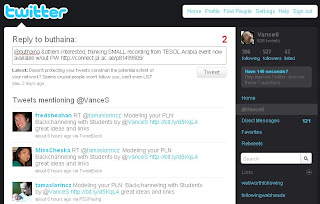 Posted by Vance Stevens at 9:13 AM