To teach is to learn: Modeling, demonstrating, reflection and practice 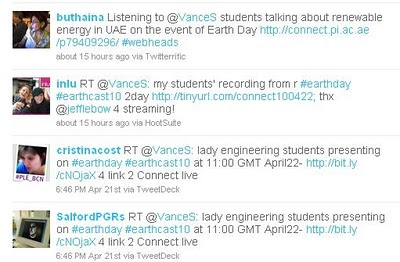 Recently, a member of my personal learning network has asked me to advise her on a training strategy for introducing CALL to teachers in Algeria. I've had some experience with her situation; though it is universal across cultures for appropriate uses of technology to be misunderstood by educators, particular contexts have their particular concerns. I've long been trying to make inroads on computer literacy and multiliteracies in Oman and the UAE, and even in Tunisia in 2004: http://prosites-vstevens.homestead.com/files/efi/papers/tunisia2004/mahdia.htm.

One problem with the Tunisian event was that its organizers could not articulate beforehand what it was they wanted me to do there. They wanted me to show them how to teach online, so when I arrived I implemented a program whereby I got the participants blogging, and I took pictures and put them online, and tried to get the teachers acting as a community. I got some resistance at the time in the form of: OK, we don't know what we want, but this isn't what we expected! Blogging? They did it and many enjoyed it, but the majority didn't see the point. However, now, six years later, the YahooGroup I set up for them still functions and I'm still in touch off and on with some of the teachers I met there via some of the artifacts we placed online way back then.

I think I've been modeling this form of training ever since. I've just had an interesting experience with my students, on the occasion of International Earth Day April 22, 2010. Events of this nature are gaining traction where I work; there was another barely a month ago: http://justcurious.posterous.com/arzanah-campus-participation-in-the-march-11

To organize the project, I created a wiki for them using Etherpad technology. Etherpad is a company that's been absorbed by Google and the technology is now apparent in the greater collaboration speed of Google Docs. The code for Etherpad is open source so it's been replicated at other sites now that the original Etherpad no longer functions.

So here at http://typewith.me/GzXAtU8oml I introduced the concept of wiki and writing collaboratively on the web, by anyone, for free without passwords. This concept is set in the context of a practical site where students can see that they can contribute (on the typewith.me site, they all wrote in their session descriptions, prompted only by a note in the wiki asking them to do that). A model for project management is established, where participants can collaborate and communicate and display creativity (the 3 c's of 21st century learning).

The Wikispace site http://earthbridges.wikispaces.com/Earthcast+2010 was the wiki used for organizing the event in the first place. In looking at the history of this wiki we see how the seed was planted and how it grew into a full-blown project and successful event with hundreds of collaborators around the world on April 22, 2010. (This led my students into a discussion of how a wiki's history protects it from vandalism, and how that works with Wikipedia; with Jon Udell's viral screencast on "Heavy Metal Umlaut" serving as an instructive example: http://jonudell.net/udell/gems/umlaut/umlaut.html).

For our portal I created the much easier to remember TinyURL:http://tinyurl.com/earthcast10pi. Now we've expanded the notion of Web 2.0 with the concept of creating URLs that are mnemonic and shortened (especially important if you want to tweet them).

If you look at the content of the typewith.me portal site you find that Twitter is well represented here. It is one of the ways we announced our event, and there is evidence here of responses on Twitter, so we weren't working in a vacuum, far from it. By connecting students with real people, Web 2.0 makes learning relevant to them.

An even more direct connection with real people was achieved using Adobe Connect, which was slotted into another event, the 24-hour "earthcast" webcastathon at http://earthbridges.net. Through this event, more contact with students and other teachers was made via Java chat, live streaming, and Skype backchannels. Participants become aware of the world of knowledge seekers available to them, and how to contact and keep in touch with them.

The Adobe Connect event produced a recording, so an archive was made here: http://www.ustream.tv/recorded/6357041. More archives were created in the blogs that I keep and was writing in to announce the event, which might have (or might still) attract comments; e.g. http://justcurious.posterous.com/earthcast-2010-at-the-petroleum-institute-abu. This post illustrates one of the wonderful affordances of Jing, http://jingproject.com, the free webcast tool that gives your images and screencasts URLs which you can embed in an email to your post@posterous.com so the picture comes out displayed in the blog post (I still marvel at that!)

Archived recordings, blog posts, and site portals preserve the event online after it has ended and give participants a greater understanding of the importance to them and to others of the phenomenon in which they took part. Further learning could occur if the students themselves would write blog posts, and accumulate these and other artifacts appearing online through aggregation on their tags, but this is the next level of understanding of how the web works and hangs together as a cohesive networking device and repository of knowledge (and how that knowledge is accessible through personal learning networks) - see http://justcurious.posterous.com/powerful-ideas-and-tools-for-getting-the-most-0

One such tool modeled, demonstrated here is Delicious, which uses common tags for keeping track of links pertaining to the event and for communicating socially what links others are finding. The common tag for the event my students participated in was earthcast10. That tag can be searched in Twitter at http://twitter.com/#search?q=earthcast10, and to get a good illustrated overview of what how the event was celebrated around the world, visit http://spezify.com/#/earthcast10.

These tools taken in and of themselves can appear too numerous and overwhelming to beginners, but when pieced together into a project such as this one, how the components work together is easily understandable. The idea is for the teacher to model the use of each part, to bring tools to bear on an as-needed basis, and the learners learn by using the tools. The learners in this case had conceivably used or heard of none of these tools beforehand. The tools were simply placed before them and they used them as they needed them. They aren't hard to use and they work well for what people want to accomplish. It's not necessary that each person know about all of the tools, but only that someONE knows about these and others and can place the tools near the learners where they are needed, and model the use of the others as they come in handy.

In my own experience working this semester with students I find that it would help if they had some preparation in the course of their traditional classwork, because depending on the nature of the project, they don't necessarily see the affordances of the tools, and can end up not taking advantage of them. I have tried to address this by mainstreaming some materials I use with my students, here: http://issuu.com/vances/docs/social_networking_2009_lessons1-3.

When students respond to the modeling, demonstrating, and reflection put into practice, the result can be a transformative learning experience. And to make it happen teachers need to be connected in order to create and be available for opportunities to collaborate on projects such as this one, into which students can be drawn. In Downes's scheme, where teaching is to model and demonstrate, and learning is to reflect and practice, I model the learning part by creating posts such as this one, where I reflect on the experience and try to understand how it happened, and then put the next iteration into practice with my students. My own addition to the Downes scheme is to teach is to learn, by which I mean it's a percolative process, one that true teachers model as they re-learn how to learn, and then show the way to students, whom we are training for jobs and careers that haven't even been invented yet.

To cap a busy day I participated in a second Adobe Connect event on April 22, as one of the panelists on a Virtual Round Table discussion of EVO's global training camp. Here I got to articulate some of these views having just come away from the Earth Day event. A recording should appear eventually here: http://virtual-round-table.ning.com/events/panel-discussion-evos-global. This topic of teacher training and how to inculcate the "culture" of learning necessitated by changes we face in the 21st century figured heavily in the discussion.  The word culture was introduced there by Barbara Dieu, and it speaks to the difficulty of the task to realize that a person of her calibre and expertise, a world-reknowned leader and frequent speaker on the educational applications of social media, appears unappreciated and marginalized in her own workplace.

Eventually I'll podcast the recording of this discussion at my Vance's GeekSpeek http://vance_stevens.podomatic.com/. Podcasting is perhaps a third level of a CALL training strategy, what I am now calling SMALL, or social media assisted language learning. There will be a discussion of that topic at the next Virtual Round Table panel on which I will sit later today: http://virtual-round-table.ning.com/events/panel-discussion-connected-and. This should be an interesting discussion because Stephen Bax will be there, and we might discuss whether CALL has become essentially normalized, and would SMALL be the next challenge for computer-based language learning?  Stay tuned to find out more :-) ...
Posted by Vance Stevens at 9:38 AM