How cognitive surplus drives us to helping one another

Why am I taking my time to write this?  I discovered the other day that it has something to do with Josh Groban, a ‘popera’  singer who Clay Shirky, in his book Cognitive Surplus, says appeals to teenage girls and their grandmothers.  I had never heard of Josh Groban nor imagined that I could possibly have anything at all in common with him.  His entry in Wikipedia doesn’t mention Grobanites (yet), but Shirky dwells mostly on these Grobania fans who have banded together to raise money for Groban’s charities.  Intriguingly, they have a lot in common with Webheads.


The Grobanites are young fans of Groban’s who met through the community on Josh Groban’s website http://www.joshgroban.com/ and at some point tried to decide what to get Josh for his birthday.  After rejecting teddy bears and other fluff, they decided to collect money and give it to one of his charities.  The first year they raised a thousand dollars, the next a magnitude amount higher, and by now they have raised over a million dollars for Josh Groban charities.
Shirky puts this into perspective.  When you donate to a charity there is usually an overhead associated with running the charity, so that  only some fraction of what you give actually reaches the beneficiaries. It’s considered acceptable if a charity retains 40% in overhead, whereas holding back only15% for administration is excellent. With Grobanites, 100% reaches the beneficiaries.

This is because they are all volunteers.  The webmaster is a volunteer; accordingly, the website is a little funky, homegrown, but friendly: http://www.grobanitesforcharity.org/.  Shirky talks about Geocities, one of the first online hosts that allowed just anyone to create web pages, and how at the time he thought Geocities would fail because those web pages were going to pale next to what professionals could do, but Shirky says he was proven wrong.  He had not factored in the heart and passion and the spirit that causes amateurs (in the etymological sense) to care more about having their say than about how their web presence online stacks up against slick professional look and feel (Webheads also utilized Geocities until the site shut down, and its exstant Web 1.0 sites retain that same look and feel).

Shirky goes on to detail how home-cooked websites invite sharing and interaction. This is exactly what we have inadvertently achieved with http://webheads.info, or as an example of 'class roots' modeling and interaction, what we are trying to inspire with http://learning2gether.pbworks.com.
Shirky analyzes such spirited initiatives.  He cites research on motivation, e.g. seminal work by Edward Deci (1972), who gave students Soma-cube puzzles to solve and then left the room to take a break.  There were distractions lying around the room, Playboy and other magazines, so the experiment was to actually to see what the students would do during the experimental treatment, the 8 minute break.  On average, they were intrinsically motivated to spend a few minutes of their free time working on the puzzles. 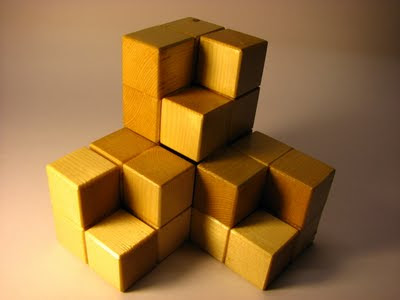 Permission to use granted under creative commons license; attribution: http://fr.fotopedia.com/items/flickr-3661361368

Then he ran the experiment again, but this time he paid some of the subjects for each shape they were able to create.  During the break he observed that those who were paid spent a minute more of their break time working the puzzles than before, since they now saw this skill as a source of income, whereas those who had no money involvement behaved pretty much as before.  Then he ran the experiment a third time, with the same subjects, without offering to pay for puzzles completed, and he discovered that during the break those he had paid spent on average 2 minutes less of their free time exploring the cubes.  In other words, the introduction of the extrinsic motivator, money, had suppressed free choice and “crowded out” the intrinsic motivator.
Shirky concludes: “Doing something because it interests you makes it a different kind of activity than doing it because you are reaping an external reward.” This research and others with similar findings overturned the intuitive assumption that you get what you pay for, that putting money into a mix would increase the incentive for people to engage in a given behavior.  Deci’s research suggested that this worked only as long as the extrinsic  incentive was there, but if that was withdrawn then the desire to do it intrinsically was “crowded out” resulting in a reduction of motivation to do the task at all, or as Shirky puts it: “increasing extrinsic motivations can actually decrease intrinsic ones.”
Grobanites and Webheads on the other hand work entirely on intrinsic motivation.  Shirky says there are three reasons people engage in such efforts.  First, they crave the autonomy.  Second they want to be perceived as competent.  And third, they want to feel connected. Furthermore, the desire to contribute to society and to help others is also a motivator.  Shirky cites another experiment where people in a town in Switzerland were asked if they would accept a hazardous waste dump in their precinct.  The request was couched in two ways.  For both groups a reason was given why the town had been selected for this, but in one form of the request, it was stipulated that the town would be paid for accepting the wastes.  Of course there was opposition, but the acceptance rate  was significantly higher when the request was made appealing to civic duty rather than when money was used as the carrot.
So money is not necessarily the most powerful stimulus for producing change for the better. People will volunteer to do good when they feel they are acting autonomously and when they will be seen to be competent at what they do.  The third reason, the connected aspect, is the one that Shirky particularly explores in his books. Previously when connecting was hard to do, it was hard for charitable ideas to scale.  It was possible last century for volunteer donors to work through a church group, for example, but if you wanted to organize 100 churches, you needed to hire a manager, an accountant, a publicist, etc. and incur overhead.  But with Grobanites and Webheads, the tools are now available for people with purely altruistic agendas to promote their niche interests voluntarily and scale those interests to reach thousands of others without needing to resort to extrinsic motivators such as money.
Shirky cites work by Yochai Benkler and Helen Nissenbaum to help explain how this works. Benkler and Nissenbaum (2006) write about “commons-based peer production" in which they discuss how the social motivations of connectedness or membership, and sharing and generosity, support the personal motivators of autonomy and competence. Shirky says: “The motivation to share is the driver; technology is just the enabler. This feedback loop of personal and social motivations applies to most uses of cognitive surplus, from Wikipedia to PickupPal to Grobanites for Charity.  Grobanite donors and supporters get two messages: both I did it and We did it.”

All this is precisely what drives Webheads, an amateur movement of educators with accumulated cognitive surplus who truly enjoy helping one another, and benefit from being helped in the bargain. As Benkler and Nissenbaum suggest, Webheads have a strong feeling of belonging, of membership in a group with a funky name "webheads". The group's members are overflowing with sharing and generosity, as is evidenced time and again in their thousands of messages posted at http://groups.yahoo.com/group/evonline2002_webheads. This leads many of us in this group to realize what Sir Ken Robinson calls our element, "the place where natural aptitude and personal passion meet," and to define our epiphanal aha! moments.

This leads into Shirky’s chapter on "Amateur Motivation, Public Scale", which begins “Amateurs are sometimes separated from professionals by skill, but always by motivation … Keeping a large group focused can be a full-time job ... Organizing groups into an effective whole is so brutally difficult that, past a certain scale, it requires professional management … salaries … bookkeeping and all the rest of the trappings of a formal organization ... As always, high hurdles to an activity reduce the number of people who do it, and the hurdle of large-scale coordination has largely separated amateurs from professionals ... when pursuing an intrinsic goal in public required considerable work, the amateurs largely opted out of public action. We have always wanted to be autonomous, competent, and connected; it’s just that now social media has become an environment for enacting those desires rather than suppressing them
"… Back when coordinating group action was hard, most amateur groups stayed small and informal. Now  that we have tools that let groups of people find one another and share their thoughts and actions, we are seeing a strange new hybrid: large, public, amateur groups. Individuals can make their interests public more easily, and groups can balance amateur motivation, and large coordinated action more easily as well.
“Globalization isn’t necessarily about size; it’s about scope. Now that the difficulty of coordinating interactions has fallen, it is entirely possible to have a tiny global organization. Geography still matters, but it is no longer the main determinant of participation.”
These ideas are echoed in Lawrence Lessig's book Remix (2008), available now as a free eBook: http://www.archive.org/details/LawrenceLessigRemix. Lessig talks about two distinct economies, commercial and sharing. Purely sharing economies thrive on just the dynamics that Shirky describes; i.e. a set of social values where members are essentially paid for their surplus time in recognition for competence and generosity. Lessig also discusses what he calls hybrids, or ventures that incorporate vestiges of both economies. Whereas there have been some ventures that have succeeded in going from commercial to sharing and visa versa, Lessig cites many more instances in which this has proven impossible. Some of the studies cited by Shirky, notably Deci's, give crucial insights into why this is so.  If projects are started as sharing ventures, attempts to monetize them simply suppress the motivations that gave them their traction.
So why am I writing this?  For the three reasons noted,  I am intrinsically motivated to do so even though my extrinsic motivators are telling me that I’d better get working on things more relevant to my paycheck.  And why do participants in a large community of Webheads invest so much of their cognitive surplus in joining me in sharing with one another?  Because, as with Grobinites, there’s no money involved.  They have not come to see the good they do as being a part of the money economy.
Now why did I know all that instinctively? Why do so many others pursue the same altruistic goals without demanding the most obvious extrinsic compensations? Because it's the natural thing that humans have always tried to do for one another. Shirky, Lessig, and others are just, after all this time, telling us why we do it, and why in our connected era, it is now possible to help one another on the scale on which we can now help one another by putting into play our inherent intrinsic motivators. 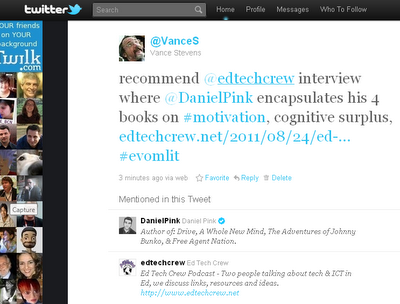 Posted by Vance Stevens at 5:37 AM

What a piece of work!

This post has been on my to-do list since 2011! I finally read it tonight (unable to sleep due to jet-lag). In the interim, I have read Clay Shirky's books, so I connected immediately with what you wrote.
N.B. Dan Ariely, Duke Univ. behavioral economist and prof. of the MOOC I recently took, has also done experiments that show that money is not the primary motivator for people to work and can even discourage them from working. The evidence builds...
Too bad we need to have money to get shelter, food, and clothing!

A classic piece, Vance--
Thanks so much for this further "explanation" of the magic that is Webheads.