Orienting and declaring in eduMOOC 2011

The concept of MOOC really appeals to me as a way to organize learning.  It apparently appeals to others as well, judging from how so many sign up for them.  When MOOCs are announced, the news spreads across overlapping PLNs like a swarm of locusts and thousands are attracted like moths to a flame.  There's one on now at: https://sites.google.com/site/edumooc/ for 8 weeks starting on June 27, 2011.
I was wondering how to get myself writing about EduMOOC. It was natural that the impetus should come from this thread on the eduMOOC Google Group forum: http://groups.google.com/group/edumooc/browse_thread/thread/6d264a22386f7b99#.
The thread relates to the optimal amount of time such a course should run and how much time participants should spend with it.
B.D.Boardman asked:
As I find myself checking in with the various discussion threads,
posts, online articles, and misc content throughout the day I notice
that I'm beginning to "chunk" my MOOC time into small 5-10 minute
segements that perhaps, by the end of the day, may add up to an hour
or more. I am wondering if other participants are having a similar
experience, and what the larger implications are of this approach to
learning.
In addition, as my attention wanders a little throughout the day, I am
also wondering if 8-weeks is the most appropriate span of time for a
MOOC? Given the content and online dynamic, I wonder if a more
"concentrated" time span (like 2-4 weeks) might be more effective for
this particular learning model?
So, does anyone have any comments or thoughts on the topic that they
would like to share?
I've dabbled in MOOCs before and use Dave Cormier's videos in a course I teach on Multiliteracies at http://goodbyegutenberg.pbworks.com/w/page/33070377/Week3EVO2011. I have lately modeled my approach in this course on the MOOC model, only there I call it miniscule open online course, on the assumption that the approach scales downwards nicely.

That course is a part of the TESOL Electronic Village online sessions, http://evosessions.pbworks.com which also run for a similar length of time.  The first round in 2001 was just for 4 weeks, but apparently the coordinators thought that amount of time was not enough because in 2002 they went up to 8 weeks.  In 2003 however, they decided they had overstepped and the time was reduced to 7 weeks. For a while after that we ran them for 6 weeks, but the last couple of sessions have been reduced to 5. The feeling is obviously that when the session goes on for too long, people get worn out toward the end of it.  Eight weeks is intensive for the volunteer moderators, a long time for them to have to sustain momentum.

But in a MOOC it really shouldn't be up to the moderators to have to drive the course for 8 weeks like a 20-mule team.  A course that is set up nicely around provocative aspects of a topic can run itself, especially once you get people interacting.  Dave Cormier for example points out that the over-riding take-away from such a course is not a certificate, as you would expect from a 'formal' learning situation, but the network you develop through participation in such a course. This dovetails nicely into the idea of learning and knowledge being essentially connectivist. As George Siemens told me once, in answer to the last question I asked him at the end of this recording: http://vance_stevens.podomatic.com/entry/eg/2009-01-28T03_19_19-08_00, it is the moderator's job to provide a coherent structure to the course. After that what can you do with 2000+ participants? They learn by constructing their own coherence in their run-up to the end of the course, based on what they are learning and how they are restructuring their knowledge and perceptions of the part of their world they are exploring in the course, and an important part of that is not relying on the moderators to do this restructuring for them.

Nellie Deutsch tweeted a question on the #edumooc tag asking " I wonder if it's necessary to stay to the very end of a MOOC. What will you gain by completing a MOOC?"  I replied "asked another way, what will you gain by starting a MOOC or lurking in one? The answer is 'whatever is gained' :-)" to which Nellie muses: "Maybe there's more learning in quitting before the end. Would it be the same if the MOOC were not free and for credit?"  (an aside to Nellie, see https://twitter.com/bnleez/status/86976985615708160 who posted this also on the #edumooc tag). 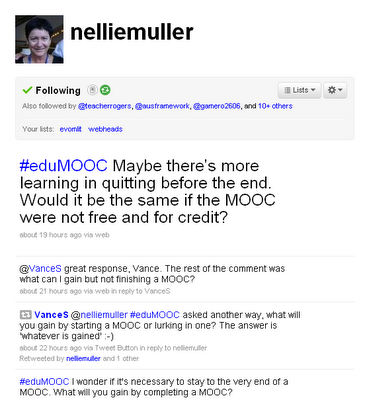 This reminds me of a line in one of my favorite Rush songs, "the point of the journey is not to arrive."  http://www.metrolyrics.com/prime-mover-lyrics-rush.html

The double meaning here is either that arriving at the destination is not the reason we travel, or that the point of traveling is to stay on the road and never end the journey.  The question of 'arrival' is what Nellie seems to be getting at.  However B.D. Boardman brings up the amount of time we should spend on the journey, and asks for insights on that question, which is what I am addressing here.

To me it's transcendental.  The point of the journey is to be on it.  It doesn't matter how much time you spend on it or when or where it ends, if it does.  YOU could focus on EduMOOC for 2-4 weeks if that's right for you, or 5 min. a day for whatever duration of time will benefit you.  That's why I said to Nellie that you gain "whatever is gained." Whatever that is, it's quantums over gaining nothing by not participating at all.

As Ken Robinson says in "The Element" (see his TED video at http://blog.ted.com/2009/01/08/sir_ken_robinso_1/), there are 6.93 billion different intelligences on the planet, a number that he would have to revise upward as people are born (see http://en.wikipedia.org/wiki/World_population). Accordingly I would say there are 2000+ approaches to coping with this particular MOOC, and the same number of opinions on how much time would be optimal for it.

I glanced over the reading on Disrupting College suggested for this week, and I'm reading the book by Clayton Christensen et al. on Disrupting Class http://www.claytonchristensen.com/. There, the point is made that the book is researched and written partly to counter the notion that education is often construed as one-size-fits-all (or 'no child gets ahead' as I like to call it). People learn differently, evincing 6.93 billion different intelligences or learning styles, to use Ken Robinson's rough figure (and I was amused by "Clay's" recollection of being involved in distance learning in the mid-70s when distance in the huge auditorium at BYU was anything past the 5th row, where the teacher was reaching the students only asynchronously, e.g. Clay slept while the teacher lectured, and the teacher slept while Clay read the coursebook.)

I'm participating in EduMOOC by blogging around the topic, tweeting, trying out a Scoop.it on the topic at http://www.scoop.it/t/edumooc/, and working whatever and whomever I encounter in this course into my summer workflow.  This post is one salvo among many being inspired by EduMOOC 2011 as we speak, with slim chance of my reading many of those other salvos, or of a significant number reading this one ...unless we consider that one person changed through encountering the opinion of at least one other is a significant number, which it is.

Learning is change; which is to say that if nothing changes, then nothing has been learned.  Ergo, as we learn we change and as we encounter one another in that process of learning we change one another.  The idea of a MOOC I think is to create one cauldron into which you pour a heap of ideas and stir, and change emerges.

Stephen Downes was once asked why he put himself in the position of having to support such a huge endeavor, and he said, because he would learn from it.  What is clear from the premise of Christensen's books for example is that there are many aspects of education that need to change, and what we are doing here is coming to grips with that.

The questions of how long or whether to see the course through to the end are good ones to be asking, but the problem with the answer(s) is that there are 6.93 billion of them.

We are all just learners here. Anything can happen!